Soviet infantry support gun. The gun was developed in 1927 by Orudiyno-Arsenalny Trest (OAT) design bureau and mass produced since 1928. Currently, we make the best replicas of this cannon in Russia.

The first Soviet anti-aircraft machine gun mount. It was developed around 1928 by Fedor Tokarev and given to the military in 1931. The mount was designed to carry up to four 7.62 mm PM M1910 (Maxim) machine guns. Soviet armed forces used it in all major conflicts up to 1945. The mount was typically put on a tripod when used stationary; mobile versions were carried by GAZ-AA trucks, later – by IS-2 tanks and ISU-152 self-propelled guns. As an infantry heavy support weapon it used a two-wheeled trolley which unfolded into a tripod.

The 7.5 cm Pak 40 was a German 75 millimetre anti-tank gun developed in 1939–1941 by Rheinmetall and used during the Second World War. With 23,303 examples produced, the Pak 40 formed the backbone of German anti-tank guns for the later part of World War II, mostly in towed form, but also on a number of tank destroyers such as the Marder series.

The legendary "Three-incher" is the most effective gun of the First World War. It was produced for almost 36 years and was in service for about 50 years. The gun served in the Finnish, Spanish, Chinese and Russian armies.

The Leig-18 was a German Wehrmacht infantry support gun used during the WW2. It was distinguished by high maneuverability and wide range of firing capabilities, combining a howitzer, gun and mortar.

The most widely used Soviet cannon experts call one of the best cannons of WW2. ZiS-3 stayed in service for a very long time even after the War and was exported to a number of countries. 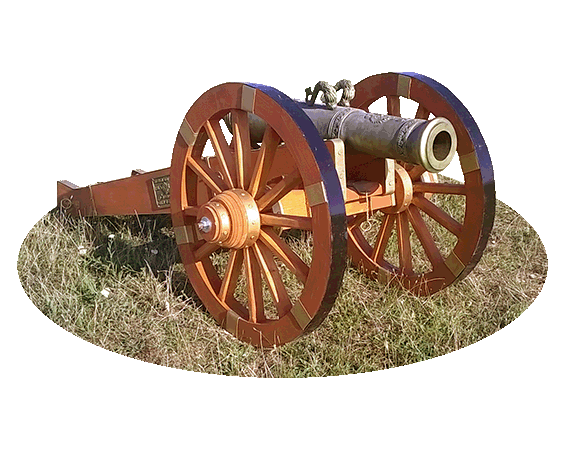 1812 "Unicorn" cannon
Licorne is a muzzle-loading howitzer designed in 1757 by M.W. Danilov and S.A. Martynov and accepted by the artillery commander, general Peter Ivanovich Shuvalov of the Russian army.
This model was developed for the 1812 Victory Parade.
Scale 1:1

We are small workshop making full-scale models and replicas of military equipment, guns, machines etc.
Primarily, our works are used as monuments, ordered by moviemakers and add real fire to historical reconstructions.
We can make a replica of any cannon or machine following your request. The guns we make fire “replica shots” and the machines roll for real.

We are located in the Krasnodar Region, Russia.
Please contact us to discuss the delivery options.